After reviewing the MLS data for South Florida, it appears that the trend of inventory declines in single-family and condo/townhouse properties remains intact.  Let’s take a look at the chart:

Earlier this year it appeared that with each month of incremental drop in properties listed for sale, the prices were bottoming and actually beginning to uptick.  Well, that no longer seems to be the case.  Inventories continue to fall, but prices (especially in single-family properties) are actually dropping as well.  This is obviously because after the robo-signer settlement was signed in March of this year, banks and loan servicers are now using their part of the settlement funds which totaled $25 billion to negotiate short sales on distressed properties.  Short sales will continue to play a large role and will be very popular until the end of 2012.  That is because of the Mortgage Forgiveness Debt Relief Act that was passed in 2007 and expires December 31, 2012 unless it is extended.  This allows distressed homeowners to exclude income from the discharge of debt on their principal residence.  This includes debt reduced through mortgage restructuring, as well as mortgage debt forgiven in connection with a foreclosure.  For instance, if you short-sell, receive a principal reduction or are foreclosed on prior to the end of this year, you will not be taxed on the forgiven debt.  Let’s just say you borrowed $200,000 and you short-sell your property for $100,000.  Traditionally this $100,000 difference would be counted as income to you (the borrower).  Until this act expires at the end of 2012, you will not be taxed on the debt that was forgiven.  That is why people will try to complete short-sales through the end of the year in order to get the benefit.  Otherwise, hundreds of thousands of dollars of additional income to distressed borrowers will just pile onto the economic problems that they face.

By looking at the chart below, you will notice that distressed sales are dragging down the average selling price, especially in the South Florida single-family home sector:

For the first six months or so of 2012, it looked like the declining inventories were helping to prop-up home prices.  Once the robo-signer settlement was executed by the largest financial institutions in March, all of the short-sales that were in progress started to get moved through the system and to the closing table.  That is where the price drops are coming from.  From June 2012 to September 2012,  the average selling price of single-family homes has dropped 15% from $336,000 to $285,000.  Condo prices over the past few months have seen less of a decrease and appear to have reached some stability here. The average selling price of condos in South Florida has only dropped about 9% from the near-term high of $226,000 that was reached in the May-June 2012 period.

As of October 2012, here is a brief summary of  the South Florida housing market:

Stay tuned to our blog.  Next we will take a look at the new foreclosure filings in Miami-Dade, Broward and Palm Beach County, Florida.  In the interim, take a look at this final chart from Realtytrac/Zerohedge of shadow inventory and how the robo-signer foreclosure halt has kept us far away from a true housing recovery. 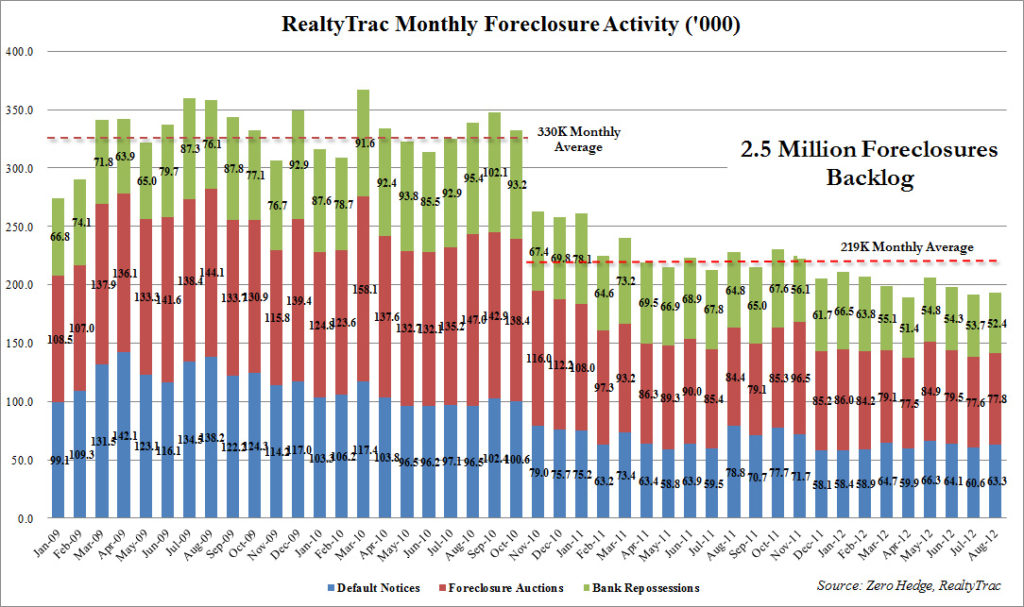 After several delays, housing “recovery” will not take place until shadow inventory ends up in the hand of borrowers who can pay

Allied Realty Group is located in Fort Lauderdale, Florida.  Our residential team serves as the exclusive broker for a variety of financial institutions in the management and sale of distressed single family and multi-family properties.  Our team will inspect, repair, market and dispose of REO properties in a manner that mitigates bank losses.

Allied Realty Group’s REO assignment territory is Broward County, Florida and we complete broker price opinions (BPO’s) for banks on a daily basis. All of our residential brokerage clients appreciate our extensive market insight since we are actively visiting properties and preparing comprehensive valuations for asset managers.