In October 2012, there were 1,977 new foreclosure filings in Miami-Dade County.  There were 1,415 new filings in January 2012, 1,432 filed in February, and the new filings spiked to 2,124 new filings in March once the robo-signing settlement was finalized.  Keep in mind that foreclosures came to a screeching halt back in October 2010 and were virtually on hold until March of this year.  Although the month of August showed a slight dip in new filings, they bounced right back up in September to over 2,000 new filings.  To see the impact that the robo-signer foreclosure halt had on a national scale, take a look at the next chart below with data from Realtytrac and Zerohedge: 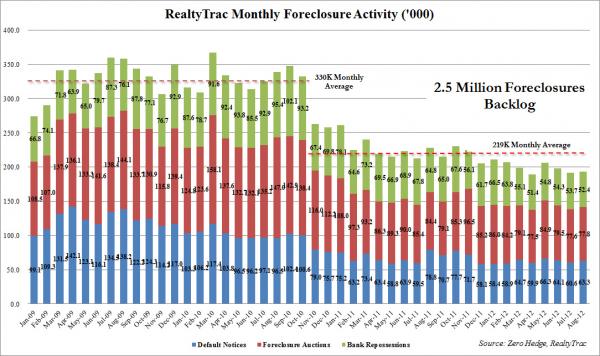 Available properties for sale have dwindled, but will gradually return once foreclosures are processed

Residential property inventories have dropped month over month once foreclosures were halted in October 2010, and it is very important to understand why.  Yes, people are buying houses and condos, but they have limited inventory to choose from and lack of supply has created artificial demand and even price increases.  Don’t worry, the South Florida housing market will now be receiving a steady dose  of distressed properties in the form of short sales and foreclosures.

Finally, to see where the properties currently in foreclosure are located, below is a breakdown by city: