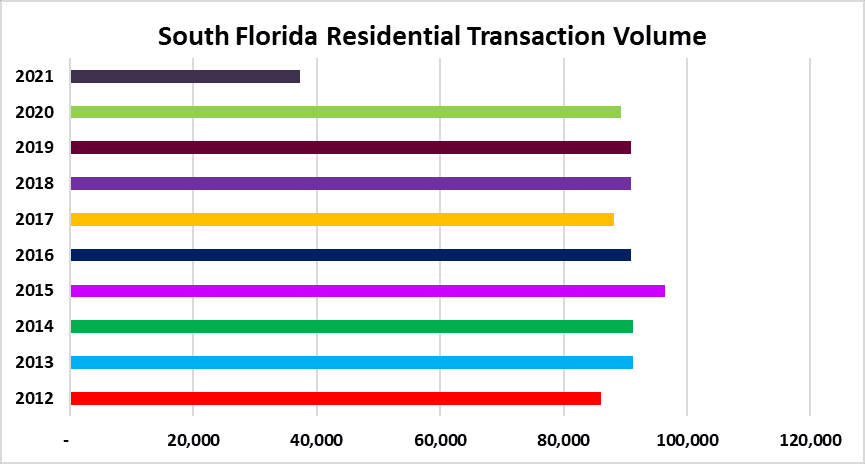 In March of 2020, they were over 17, 405 houses listed for sale in the Tri-County area. Last month, there were only 7, 749 houses listed for sale in Miami-Dade, Broward and Palm Beach County. After one year of steady declines it looks like residential inventory may finally be stabilizing at these levels. Condo properties weren’t as popular during the early stages of the pandemic, but as inventory of houses declined, condos started to gain popularity. In March of 2020 there were 29, 227 condo properties listed for sale in South Florida. Last month there were 18,173 condos available for sale.  Even with such limited inventory, it looks like the institutional buyers are in the market just like after the last housing market crash.  This sure doesn’t help the housing affordability issue when first time buyers have to compete to compete with Wall Street firms for a property. 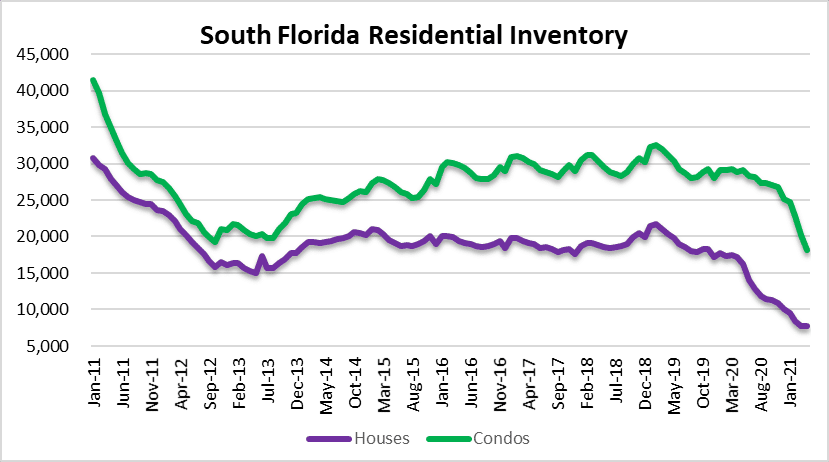 Prices continue to climb for single-family homes and condo properties across South Florida the average selling price of a house was $943, 299 in April. The average sale price of a condo property was $476,871 in the month of April. We may have finally reached a peak after the spring selling season and as inventory starts to hit the market prices will hopefully come back to earth. 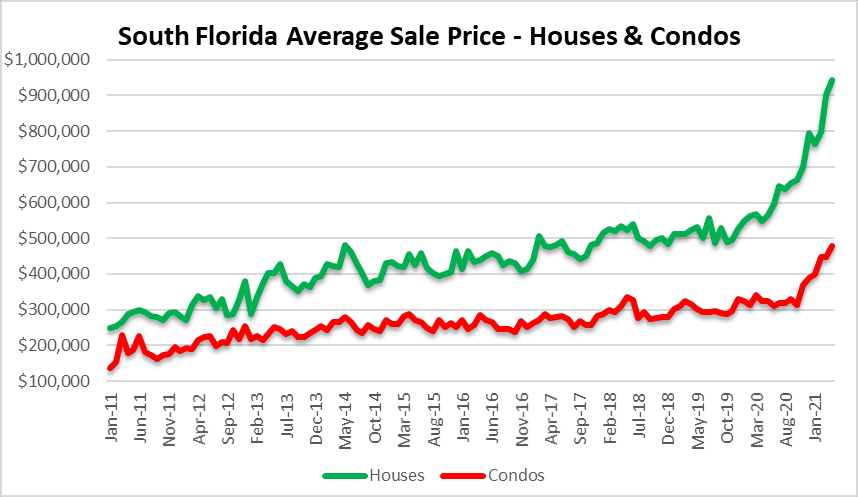 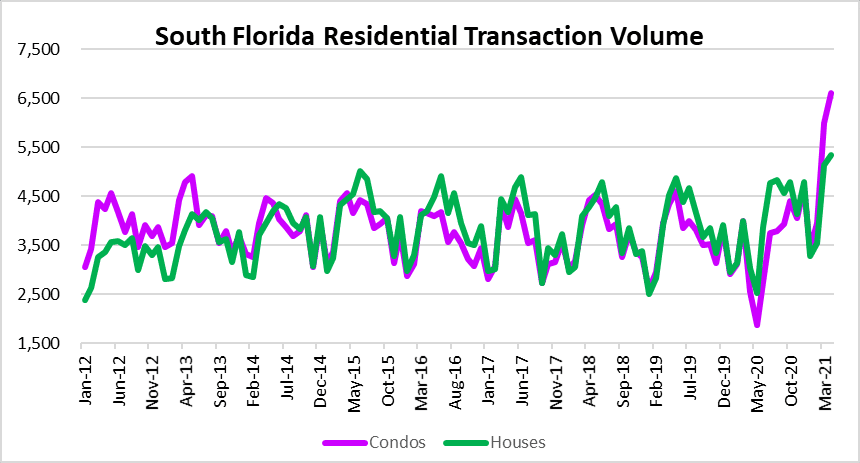 Borrowing costs remain very reasonable for buyers still. There have been a few points where we thought rates would increase, but nothing has transpired yet. If at some point the Federal Reserve chooses to slow down their asset purchases, rates will begin to rise once again. Since the pandemic began, they have been buying nearly $40 billion and mortgage backed securities every month and have yet to stop.  Keep in mind that the $40 billion in mortgage purchases each month is in addition to $80 billion in treasury purchases to keep rates artificially low.  This week marks the 8th anniversary of the “Taper Tantrum.  If you look back to May of 2013 on our mortgage rate chart, you will see the last time the Federal Reserve starting the discussion about tapering asset purchases.   Bond rates (and then mortgage rates since they are tightly correlated) basically had a tantrum and jumped almost a full percentage point within a month on the news.  Before the taper tantrum, a 30-year mortgage was about 3.5% and it climbed over a full percentage point to 4.5% in one month.  People forget how dependent we have become on cheap money.  Maybe now is a good time to remind everyone about the massive, nearly $8 TRILLION Fed balance sheet.  The economy hasn’t just been supported by stimmy checks, enhanced unemployment and PPP bailouts that your neighbor used to buy a new boat, but the Fed has been the invisible hand under asset prices in order to keep the party going since the Great Recession.  They have exacerbated wealth inequality more than anyone else by bailing out asset holders for over a decade and hanging the middle class out to dry.  So when people ask if the housing market will crash again, the answer depends on if the government continues to intervene with bailouts and easy money. 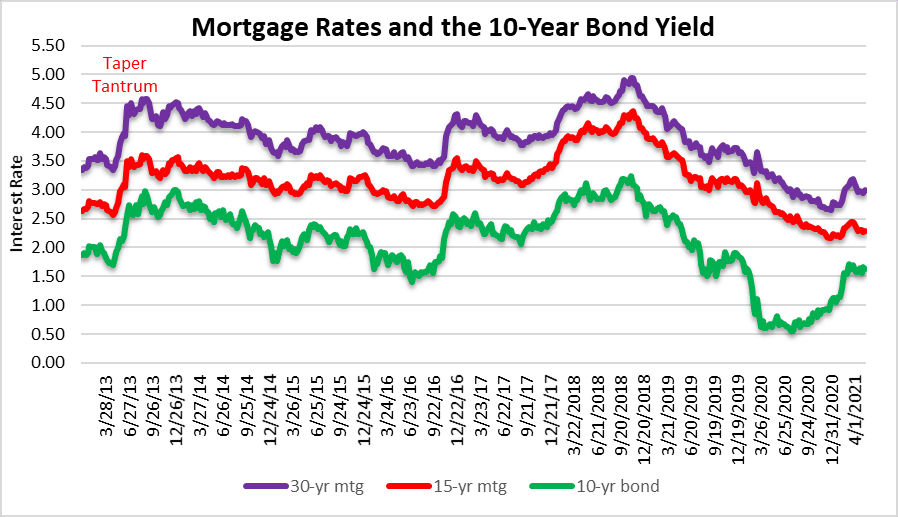 There is still a foreclosure moratorium in place until June 30, unless extended.  That’s why new filings have been limited and probably won’t pick-up until sometime during the summer.  Don’t be surprised if there is a spike, just as the was one in 2018 after they were halted after Hurricane Irma.  The current halt has been for much longer, so the spike may be prolonged also. 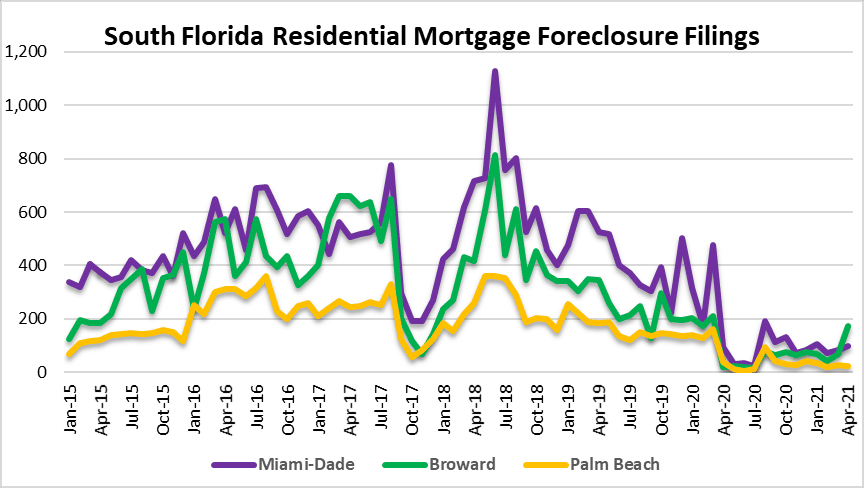